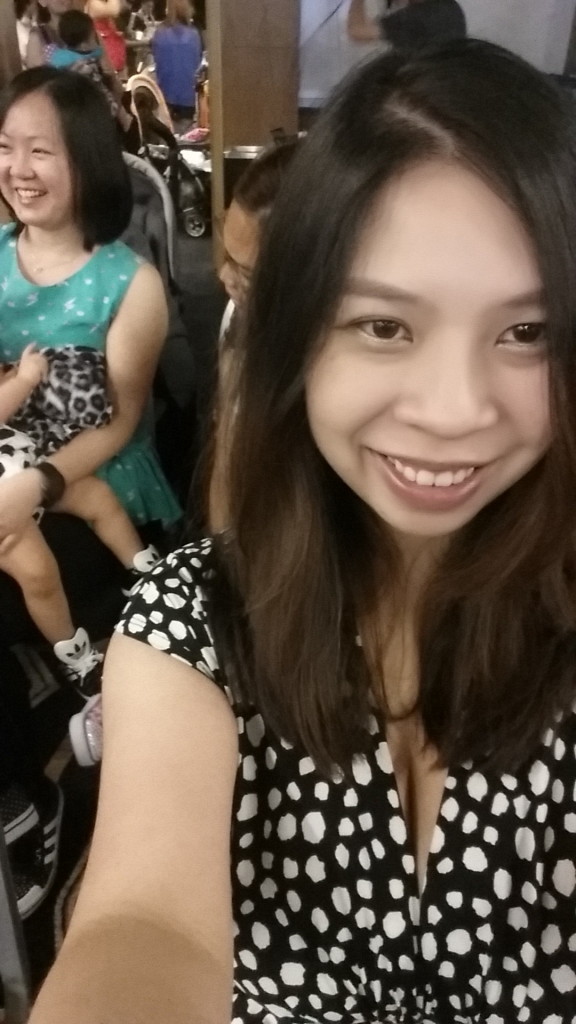 I sneaked out to attend the breastfeeding challenge today at Suntec City Converntion Center. Its brought to you by Thomson Medical, sponsored by Philips Avent and Spring Maternity! 😀 I couldnt miss this event since im such a big breastfeeding advocate! It was soooooo packed, i overheard some mummies asking if they could still join the event although they didnt pre-register for it. I must say the organisers are quite nice, let them in but informed them that there may not be enough goodie bags because the goodie bags were all accounted for by those who did the pre-registration prior to the event date. Soooooo, the lesson here is to pre-register! HAHAHA. There were so many babies and all the babies are on breastmilk! 😀 I was seated next to a mummy with a cute 15 month old boy who kept trying to take walks instead of sitting down. Jaime Yeo (not sure if this is how you spell her name) was the host for the event and there were invited guest speakers such as the very famous Mrs.Wong Boh Boi from Thomson ParentCraft. After the talk, there was the attempt to break the record number of mothers breastfeeding at the same time, in the same room! Too bad i didnt bring Mikhail, or i could have been part of the record breaking. ):

After the breastfeeding challenge, i headed to the Supermom Bazaar Baby Fair on the 4th floor of the convention center to look around and also get some supplies (i ended up carrying so much things home). I took some pictures of the fair for you guys! Theres so many big brands there and quite a number of them are the actual brand owners! In case you didnt know, this is how it works.

So COMBI was there with all their awesome products! They had strollers that allows you to customize the colours of the outlook, so you can have a rainbow coloured stroller if you want (like wheels of all different colours, canopy etc). Also there for a very good price, was their Fealetto Auto Swing parenting station which i reviewed last week. i spotted a plush toy that i really like but didnt have time to get because i wanted to tour the whole fair and had limited time. 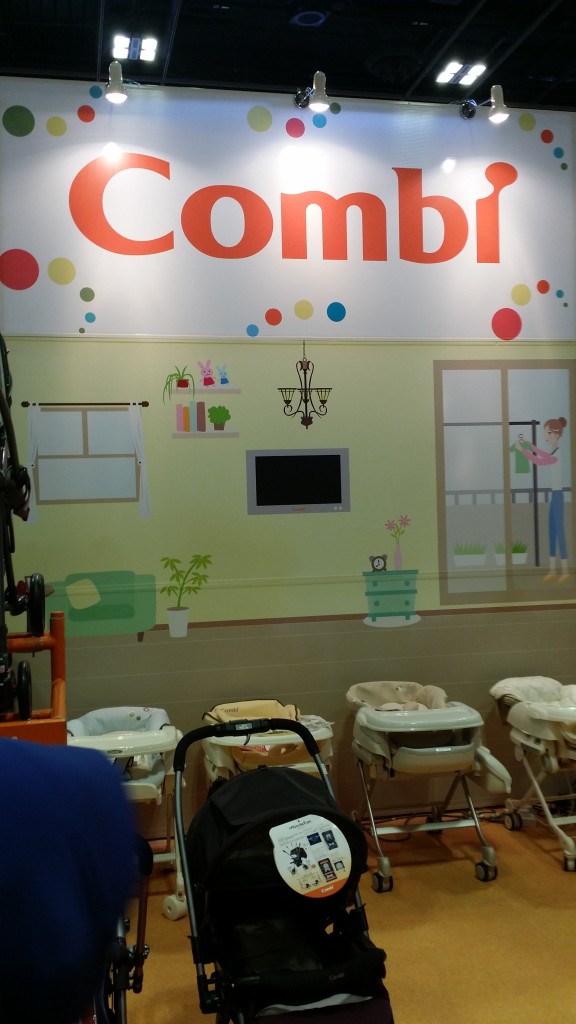 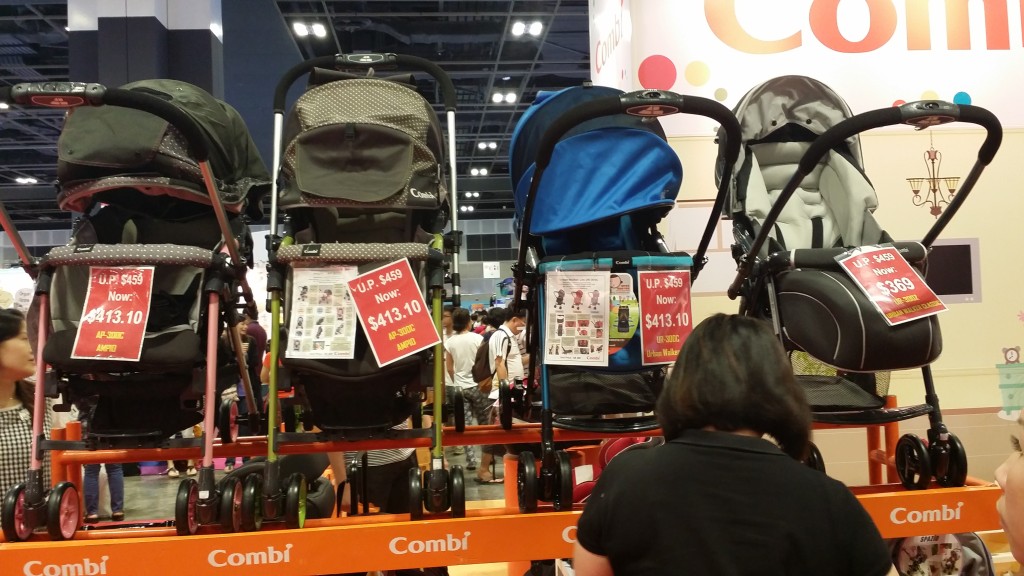 There are Leapfrog products at 50% off!! I want a LeapPad 3 please 😀 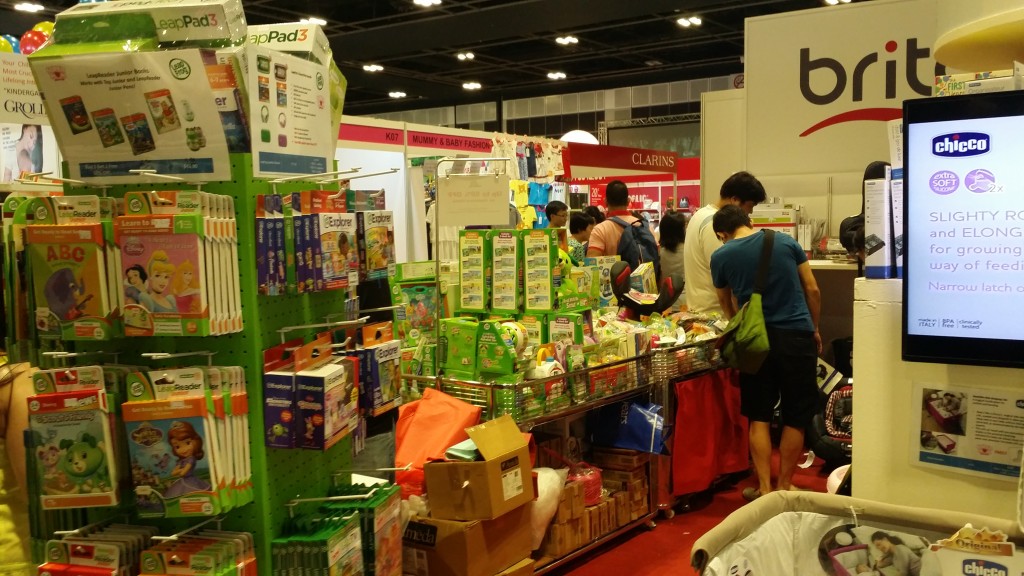 AND AND AND this CHICCO product that im trying to convince my husband that we need! 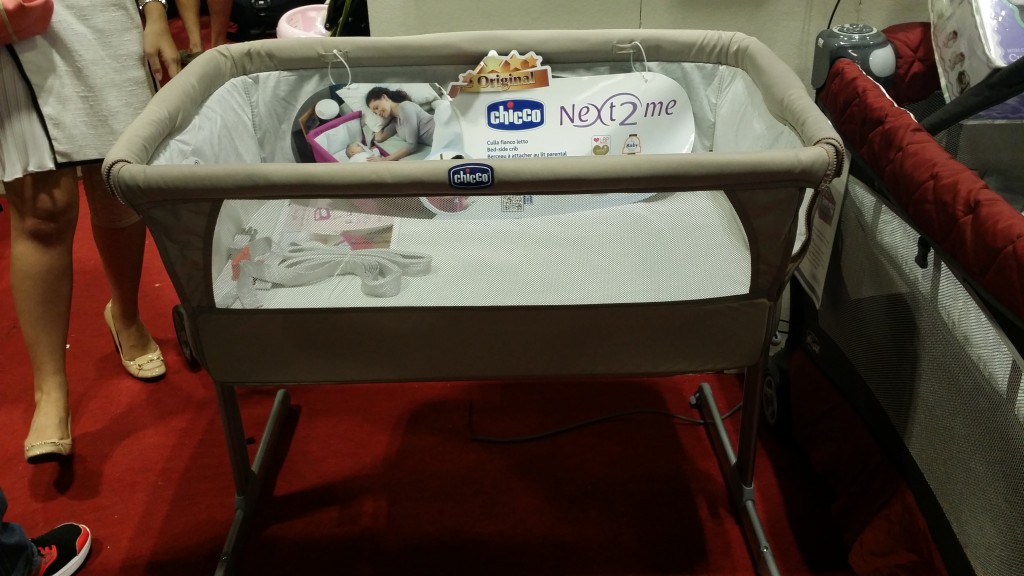 Its a co-sleeper thats so compact! Perfect for breastfeeding mummies like me (and all other mummies who want to sleep super near baby) who have to wake up through the night to latch my newborn. The baby is right next to you! No need to get up and walk to the crib in the dark. And it makes it a safe sleeping arrangement if you have a 22 month old toddler like me. He likes to do break dancing in his sleep so Mikhail is definitely not safe in our master bed as of now. It comes in 3 colours, but my favourite is the silver white one which i feel looks the classiest! Chicco also came out with their new range of bottles! I got 2 newborn size to try, will post a review on it after i have Mikhail test it out! 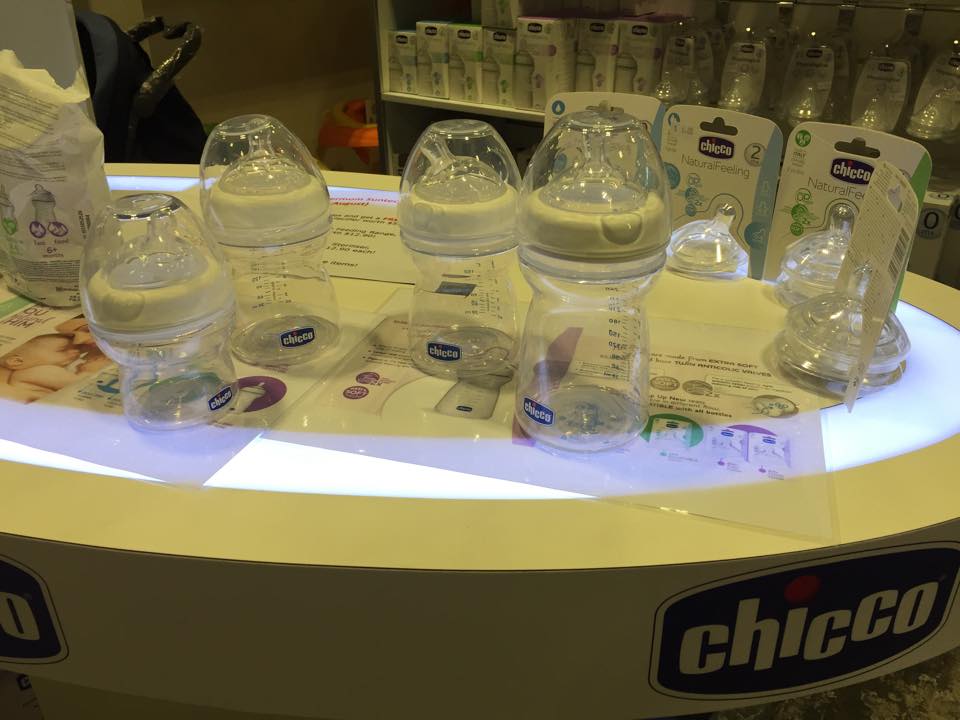 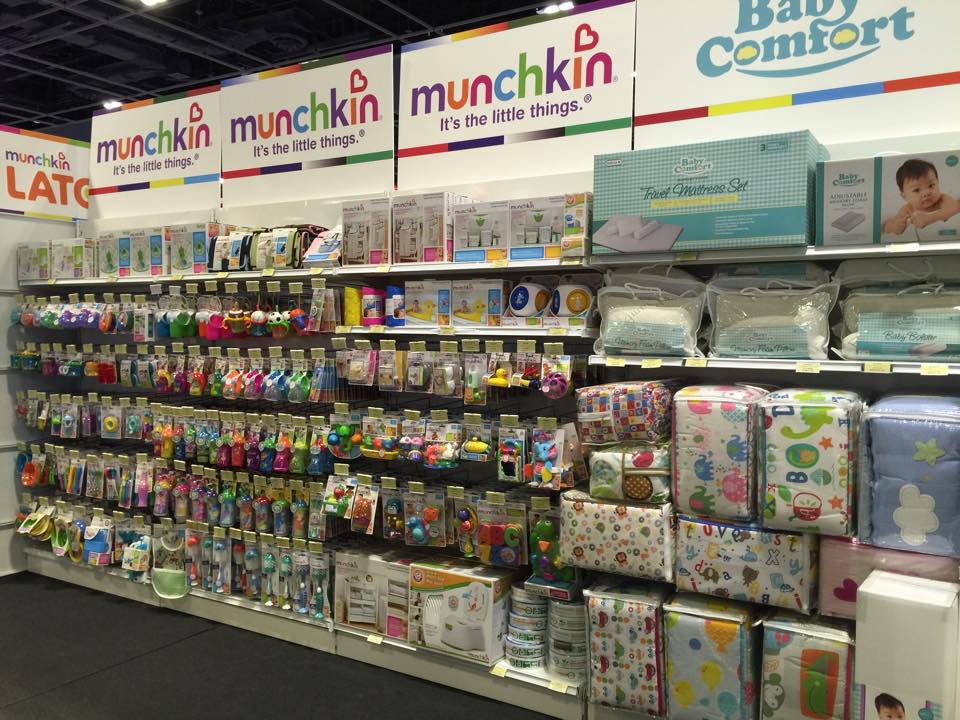 The crowd was good and i love that the vendors are much more organized and efficient as compared to some other fairs that i went to. I stocked up on my Pigeon liquid cleanser (bought 6 refill packs, 3 refill packs for $27) and bought pigeon detergent to try because my maid told me that she used it at her previous employer’s house for the newborn and it was good. I will post a review on it as soon as i tried it out for a week or two. 😀 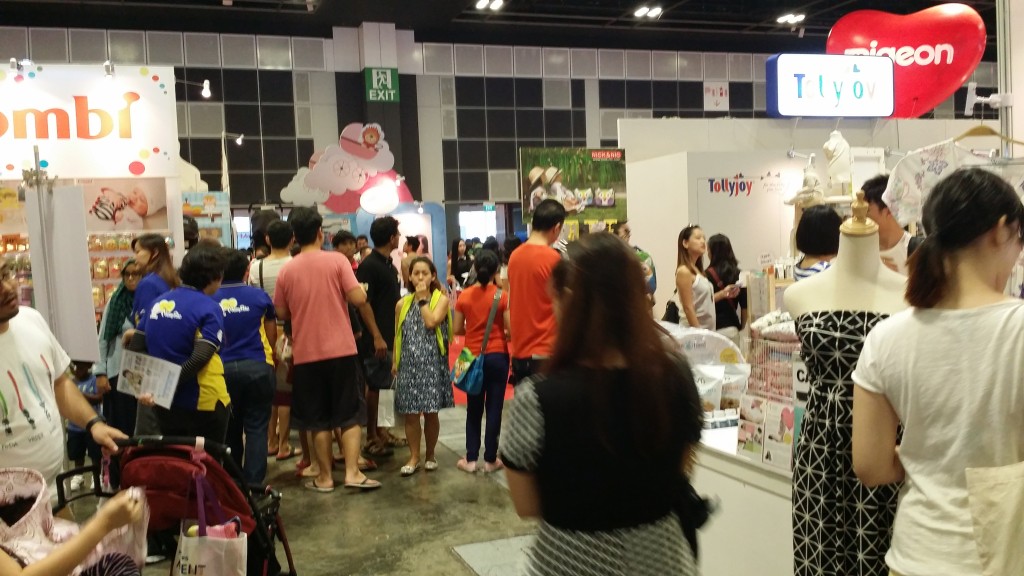 The crowd was good!

I went to Tollyjoy to take a look at what they have and bought a powder puff container and got a few samples for their new Tollyjoy pullup pants! Yeah, i didnt know Tollyjoy carried their own diapers!! You should go by to get a sample and try it out. Once Charles has his verdict, i’ll let you guys know if it is a yay or nay diaper.

You must also see their nursing room, very nicely done and each cubicle has a fan! So its not stuffy and hot! 😀 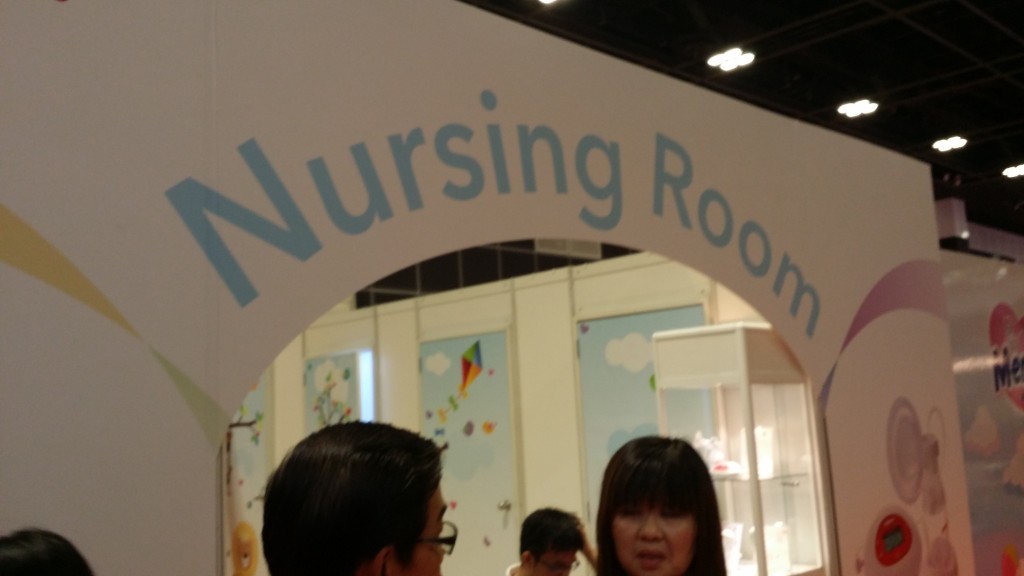 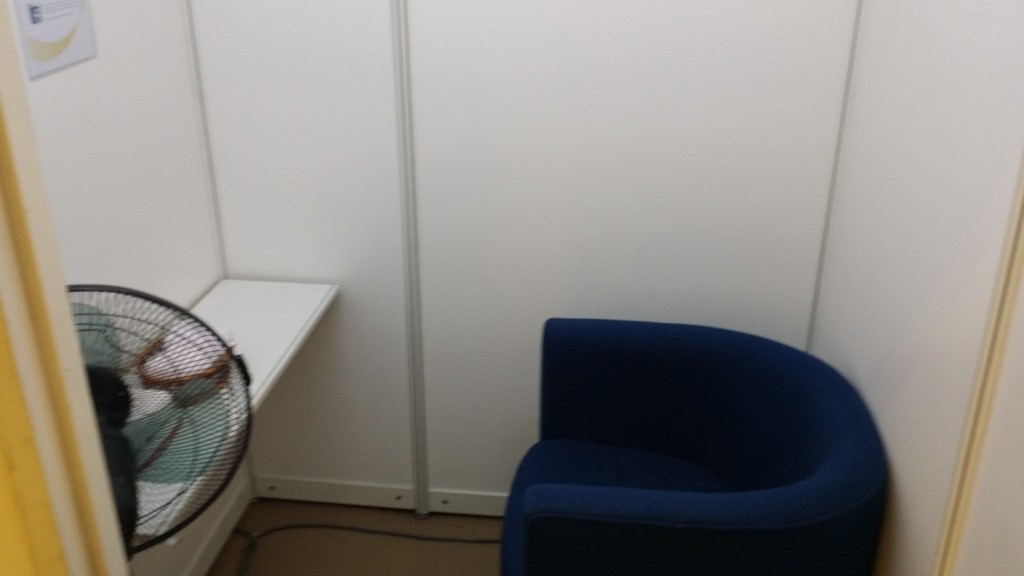 I brought my pump, intended to pump my engorged breast but realized i didnt bring my cooler bag. ): So, had to rush home instead since my breasts were killing me. 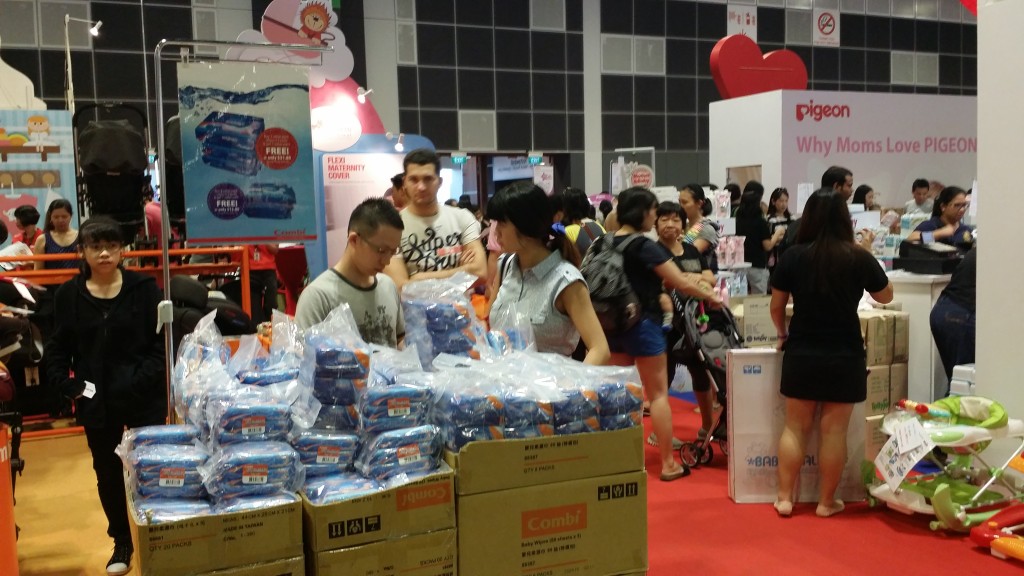 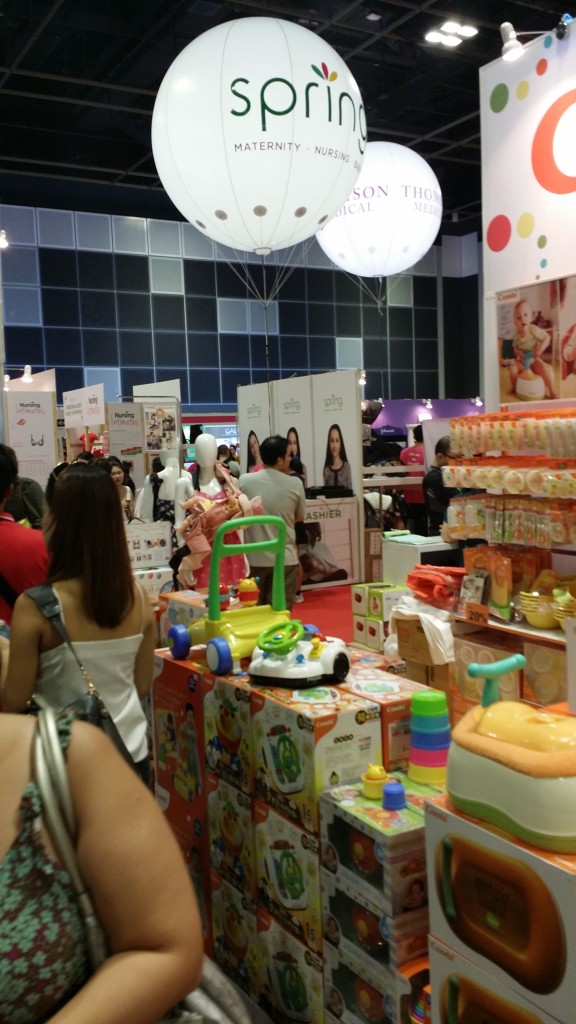 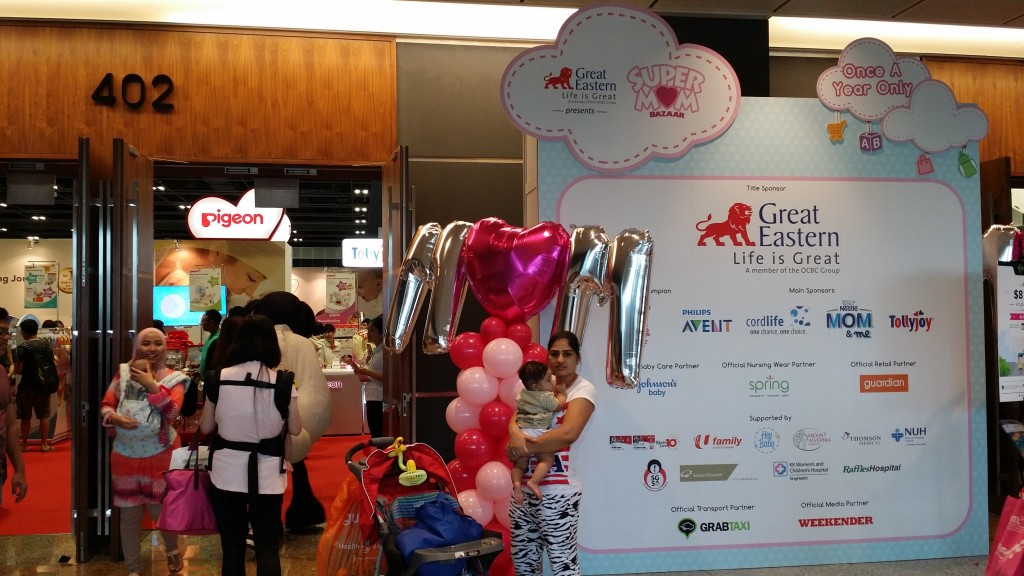 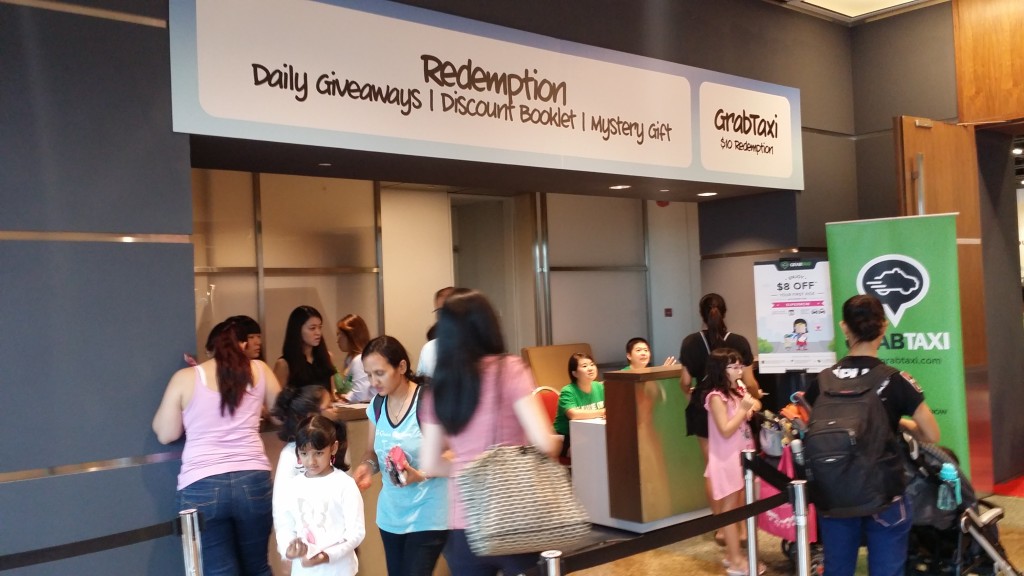 There was a booth for GrabTaxi discounts if you spend above $300 at the fair! How thoughtful! 😀 I made use of it because i bought so much stuff (i also bought a toddler Tula carrier)! 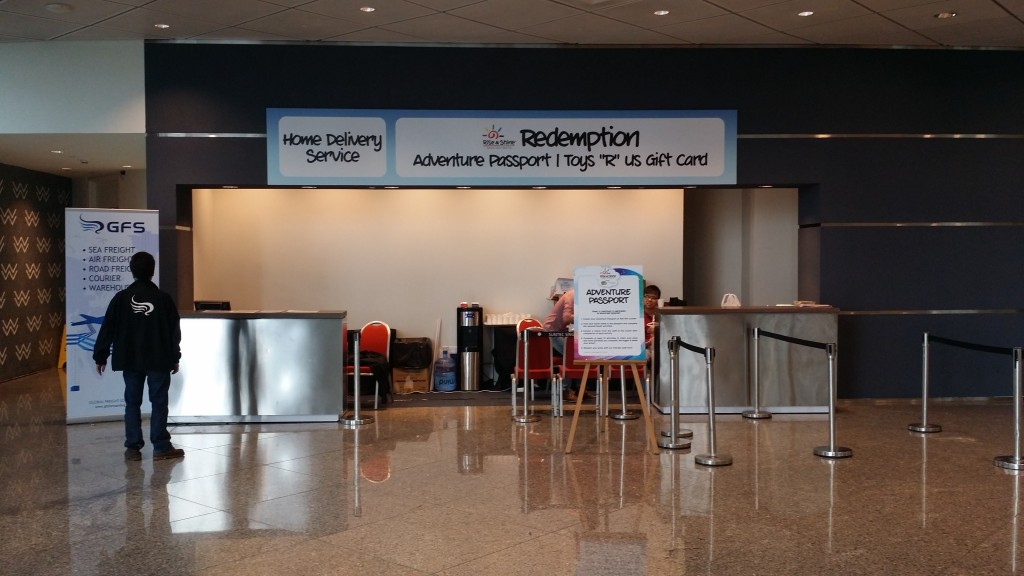 So overall, I realllllly enjoyed the Supermom Bazaar Baby Fair and i will 100% come back again next year to get all my baby and toddler supplies. Just to share, happening in conjuncture is the Rise and Shine event for toddlers (also by the same organizers that do Supermom Bazaar) that has SOOOOOO many fun activities, trial classes and educational information for the parents! Sneaking out today was so worth it and i want to thank my darling husband who was very willing to brave the solo mission of handling both the babies by himself armed with a stash of my pumped out breastmilk! I came home to see this, arent they cute? 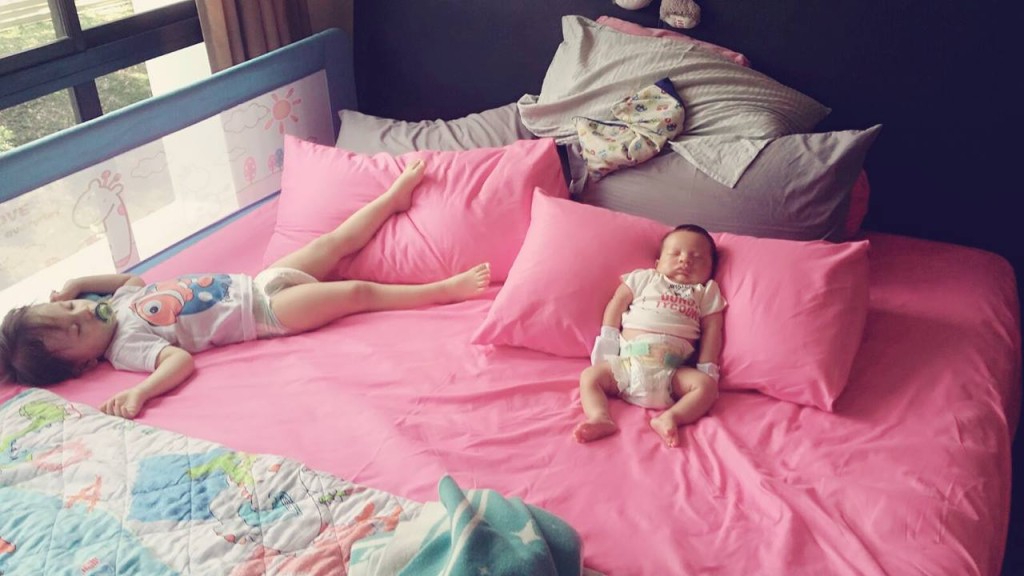 This should actually be the end of my post BUT its not.

I really cannot take it and want to bitch about this person and it is in this post because its somewhat related to baby fairs and i just cant hold it in anymore.

As you all know, im a product reviewer. So i do write ups etc and because of that, i have had many opportunities to talk to many small, medium and big vendors who sells or distributes baby products. These vendors can also be participants at a rival baby fair (not Supermom Bazaar). I am not BAISED but i do enjoy working with people who are nice and ethical. 99% of the people i have met in this industry so far, are very nice and very ethical. EXCEPT THIS 1 person. WHO?

Audrey Wong from TLO. It seems like she is a terribly vicious and vindictive person who doesnt understand the word ethical, much less how to be ethical in a business. I know that there can be rivalry between businesses but as long as it is all healthy rivalry, its fine. At the end of the day, consumers can still make their own choice.

So basically, a few baby stores that i had the chance to collaborate with, have had this conversation with me on baby fairs and as it seems, that Audrey (who is a vendor at another Baby Fair and is very very close with the fair organizer) has been going around lying to these new and budding baby vendors.

Among many lies and horrible things she has done, below is one example.

Audrey has claimed that she has participated in Supermom Bazaar and that the crowd was bad and that she didnt even manage to break even in terms of money.

Audrey Wong of TLO has never participated in Supermom Bazaar’s fair. EVER. I have actually verified this with the organizer themselves because i really wanted to find out if it were true. However, what really happened? The first fair Supermom Bazaar had, Audrey came to the fair with the organizer of another baby fair and caused some trouble. In the end, police were called in and they (Audrey, her husband and gang from other organiser) were told to leave and were escorted out by the police.

Ever since then, Audrey has, on various occasions (on social media and word of mouth) spoke horribly and told lies about the Supermom Fair. 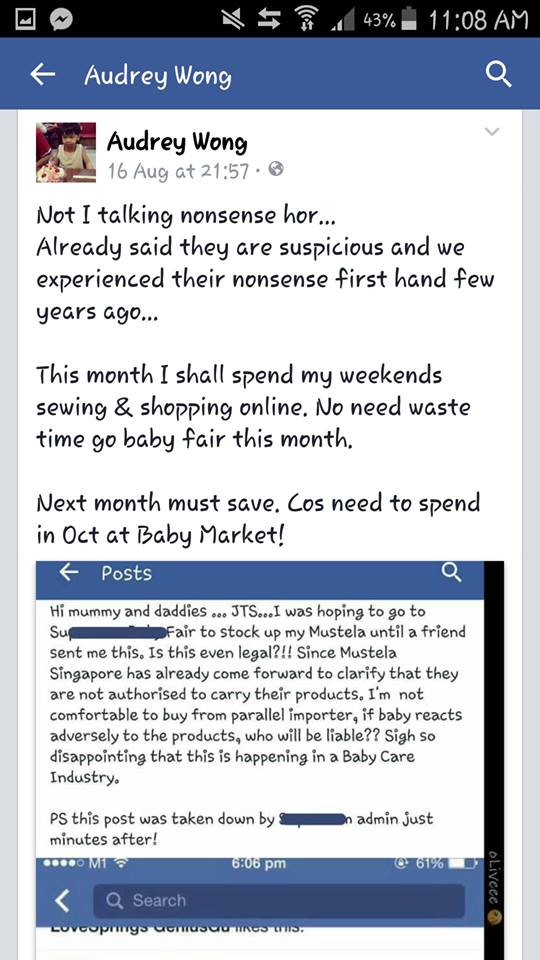 Making sure everything, even small mistakes made by the fair or unconfirmed rumours are made into a big issue!

Just to affirm that she is not a nice person (im being very kind and using super kind words here), even the people who used to work with her, dont have very nice things to say about her. Basically, she is the kind of person thats very self absorbed and super vindictive towards anyone who doesnt seem beneficial or of any use to her.

She even tried adding me as a friend on FB just to see if im a vendor at Supermom. -_-“ 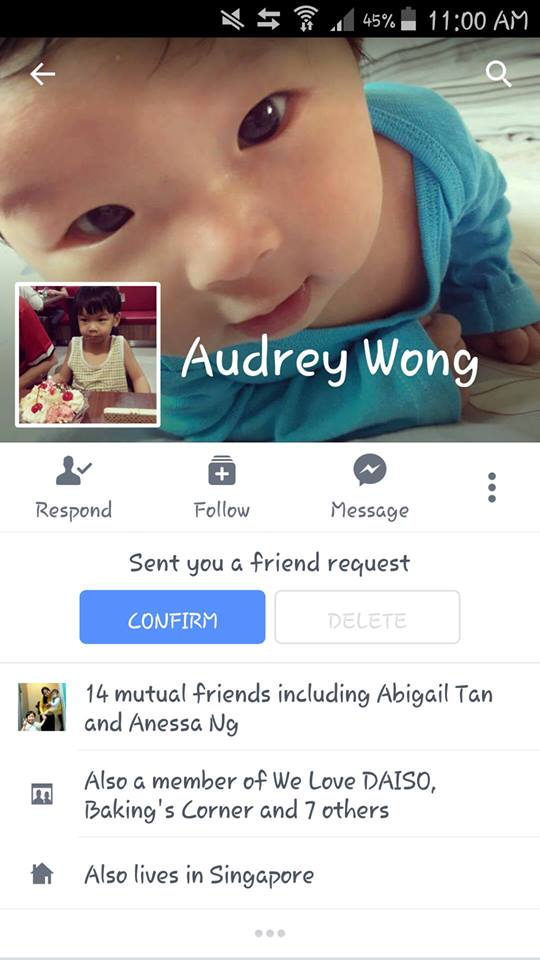 I hope you see this AUDREY WONG of TLO and know that your dirty little lies and moves does not go unnoticed.

So since this post was published, i have had a few more people come forward to share with me their horrible experience with this Audrey Wong and i found out that she SACKED a pregnant employee after calling her stupid and slow (hello, she is pregnant and was hospitalized)! Absolutely disgusting. *i wouldnt even spit in your direction.

Sorry, maybe its my unbalanced hormones, but i just really needed to speak my mind.

I personally feel that different baby fairs have different merits, so theres really no need to bash each other. Its important to be ethical and only have healthy rivalry. Afterall, its a big industry, im sure theres enough room for everyone. More fairs just means more choices for us, the consumers.

One thought on “Baby Fairs, To Go Or Not To Go?”